Montreal from my hotel room

I’d like to thank whoever organized ACCUTE’s program for our “Runaway technologies” session this morning: three presentations about Canadian science fiction (assuming Atwood doesn’t mind her work being called that now) and its related discourses (see session title) played very well with each other. The session not only prompted keen questions for all of us presenters, but also generated more questions about connections among the papers than about the individual papers: a good sign of well-harmonized topics. The resulting discussion was really productive and engaging for audience and presenters alike. (Well, so I thought, anyway.) And in the process I made some fine new acquaintances.

I also learned at least one new word. Atwood has described Year of the Flood as a “simultanuel” — not sure about that spelling, but it’s for a “-quel” that’s set next to a prior novel’s story (Oryx and Crake), not before or after it. Too bad our time was up before I got to ask if anyone likes Peter Watts’ word better: “sidequel.”

Which reminds me, Watts has generously shared a kind word about my other Congress paper, which goes into more detail about his work, in relation to the copyfight. Meanwhile, Canada’s news media now report that the Harper regime plans to table its latest version of a Canadian DMCA in one week’s time. What Watts’ characters say of extraterrestrial life, we might also say of Big Media’s persistent campaign to digitally lock down culture:
Technology implies belligerence. 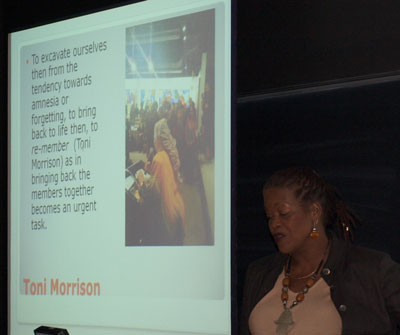 It was one of those talks from which you can take away enough reading tips to plan a full-year grad course. Her interpretations of reggae and calypso artists and songs were powerful — as evocative as the lyrics she quoted. I’d have liked to hear more of her angle on Caribbean music forms and their meanings. (And I couldn’t help but reflect that here are music forms, like dancehall, which have flourished by flouting conventional copyright regulations. Is there any correlation between a poetics that can go transnational and an IP culture of flexible fair use?)

The ACCUTE sessions I sat in on this afternoon were, first, another very well-choreographed set of talks about US pop culture and the discourse of “healing America”; and, second, the campus reps’ meeting. Acting as proxy for AU’s designated ACCUTE rep, I got a revealing look at the society’s inner workings. (I could tell you more, but then I’d have to kill you.)

And throughout the day there was the welcome experience (culminating this evening in a rammed roof-patio over egregiously over-priced pints) of catching up and comparing notes with colleagues I haven’t seen in too long. (But then again, I work at home, so my bar for “haven’t seen in a long time” might be set somewhat low.)