On Daniel Levitin’s This Is Your Brain On Music (1)

“Do you remember rock & roll radio?” – The Ramones 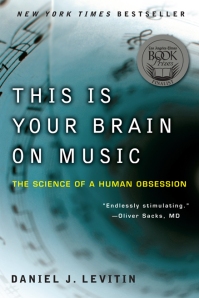 This summer I read Daniel Levitin’s bestselling This is your brain on music (2006), a book about music in neuroscientific and psychological contexts. This is the first of two posts detailing my critical responses to this engaging and problematic book.

The book is an absorbing introduction to the study of music according to these fields, and it begins with a crash course in the basics of music theory (e.g. what terms like pitch, timbre, and interval mean; what scales and octaves are) that I found especially welcome and informative, as a reader with no background in that area beyond an eighth-grade strings class of which I’ve lamentably since forgotten anything I learned.

The book teems with startling observations and suggestive arguments. Here are a couple of the points I found most interesting:

A recurring focus of the book is memory and its relationships with music appreciation, cognition, and performance. As cultural activity that commands a conspicuously large and diversified proportion of corresponding neural activity (one of the book’s main claims), music is intimately involved in many ways with memory. Levitin argues, for instance, that an adult remains deeply attached to the music one listened to as a teen because of neural developments specific to young adulthood, and that more generally, a powerful musical experience becomes profoundly associated in memory with the recollection not just of its moment but also of the broader subjective context of that moment. Like smell, music is a potent trigger of vivid remembrance.

This insight is one of several in the book that got me thinking of further interdisciplinary directions in which to take it. In this case, the ability of music to mark a given time invites a corresponding investigation of changes in technologies of music production and consumption. Since the advent of the iPod in particular, something I have thought from time to time is how this kind of digital playback device – in synch with the shifting of recorded music’s format from analogue media to digital files, and the sheer ubiquity of music in social contexts – has a “flattening” effect on the interface between music and memory. That is, the detachment of songs from analogue media enables a dramatic “shuffling” of how they can be listened to, mixed, mashed up, or otherwise appreciated. In principle, the analogue cassette tape provided the same capacity to shuffle and flatten – to customize and recontextualize – the listening experience, as Glenn Gould mused in his radio documentary “Dialogue on the prospects of recording,” and as the early history of hip hop demonstrates, in do-it-yourself repurposings of consumer tech like mixtapes and boombox pause-button cuts. What the digital file and playback device enable in terms of this shuffling and flattening thus differs in degree rather than kind.

But the degree seems the determining factor here: in the digital environment, I can create a playlist that draws as readily from the music I listened to as a teen, as from the music I listen to now, or from music I’ve never heard before, whether ancient or contemporary. Or I can chance to hear a song I liked as a youth while at a bar or a shop. The scale and ubiquity of digital music’s affordances for shuffling the music listening experience represent a labour and logic of repetition, one of the effect of which is a flattening of a given song’s relationship to memory. For example, one composition I have enjoyed consistently since my teen years is Bach’s Brandenburg Concertos. For the first few years I listened to it – as one or both of the CDs in which format it had been given to me, or in one-off tracks I put on mixtapes – I may well have associated it with a specific memory, whether of the first listening experience or of my larger subjective state at the time. But I have listened to it so regularly and constantly through the years (er, decades), in whole or in part, that hearing it now – as I write this in fact – doesn’t prompt any specific memory by association. In contrast, last year I rediscovered a box of mixtapes I’d made as a teen, mixes of songs dubbed from radio broadcasts. Listening afresh to these old tapes, I encountered some songs that had stayed with me through the years – but I also encountered some that I hadn’t heard since maybe the year or the week that I’d first made them. Hearing OMD’s “Forever (live and die)” for the first time in twenty-something years instantly flashed me back to grey dawns riding the TTC to highschool, absorbed in Walkman listening. Between these two scenarios, there’s an intervening third: repeat listening that supplants an initial associated memory with a subsequent associated memory. The first time I heard Madame Zu and Jon Doe’s “999 Matrix” was at a Toronto rave circa 1999, the association with which scene stayed with my subsequent listening of the track, until I sampled it for a grad student conference paper I presented in 2003, its association with which moment stayed with the track until, most recently, I included it in a DJ mix I now listen to when I go for a run – the somatic labour and muscle memory of which now help associate the track with images of my usual neighbourhood run.

If you clicked on either of the preceding links to listen to the songs mentioned, and if you didn’t previously know them, will the click-through establish a new music-memory association for you? If you did know them, does the listening anew, or even just the reference, trigger an already established association? Or even augment it? The experience of digital music listening, at least in my anecdotal experience, seems dramatically to elasticize and decontextualize the relationship between music and memory. With more music – from the whole history of recording – now available on demand than has ever been available before, via a myriad vehicles and platforms, one of the emerging implications of digital media for the experience of music is an attenuation or deracination – a kind of flattening – of the listener’s psychological relationship between reception and remembrance.

This entry was posted in mix and mash, music and tagged books, music, postaday, research. Bookmark the permalink.