“Stephen Harper as Killer Robot” is my new article in English Studies in Canada‘s just-published special issue on the automated body. 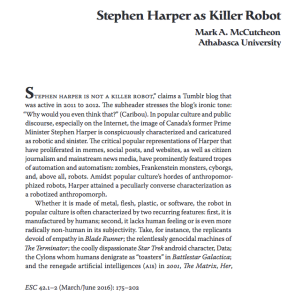 While an article about Harper might seem like a political postmortem, the former prime minister’s popular caricature as a robot speaks to widespread fears about the implications of technology for democracy. These alarming implications have been analyzed recently in tech CEO Berit Anderson’s article “The rise of the weaponized AI propaganda machine.” Anderson’s article is a must-read for appreciating the extent to which digital technology now poses a real and present threat to democracy. Anderson’s article sort of picks up — and dives in — where mine leaves off, as a discussion of how that threat has been growing in Canada for some time now. 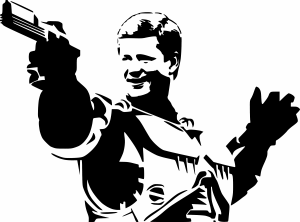 Stencil by “myheadhurtsalot” (https://i.imgur.com/JFfG3.png). My thanks to this Redditor for their permission to reprint their image in my article.

“Stephen Harper as Killer Robot” is currently available online via the Project Muse database, but ESC‘s decent open access policy means the article will be publicly available soon, in 6 months to a year (that’s soonish, for academia). But in the meantime, if you want a copy and can’t access Project Muse, leave a comment below, or send me an e-mail at academicalism[at]gmail[dot]com.

Like Loading...
This entry was posted in politics, popular culture, writing and tagged Canada, democracy, robot, technology. Bookmark the permalink.