Banksy and the persistence of postmodernism

Watching Exit over the holiday was more or less my introduction to Banksy and his art. The film is a glinting glass onion of layered ironies; the scene it sketches, the stories it tells, and the style with which it is executed all declare that the reports of postmodernism’s death are greatly exaggerated.

First, a backgrounder on these reports (to which a still-going concern like the editors of Postmodern Culture and other scholars of postmodernism might rightly object). It was maybe the Sokal affair that rang the first death knell of postmodernism, virtually in the teeth of its pop-culture arrival: in Simpsons references, raves, Tarantino movies, Kathy Acker’s last works, and so on. The short version is that one Dr Sokal submitted a hoax “postmodernist” paper to a prominent refereed journal, which accepted it for publication. Designed to lampoon the perceived excesses and inutility of postmodern theory, the affair ended up making peer review look bad as well. For some reason, Richard Dawkins joined the ensuing pile-on; he published an unprovoked and ill-informed rant against postmodernism as a review of Sokal’s work in 1998. It might have been suitably lost to public memory, except that he exhumed this baffling bit of “blind and dumb criticism” to post it online in 2007, at which time it mostly just made Dawkins seem like the drunk and belligerent crasher of a party that most people had already left. (It’s also rather unseemly for a knighted scientist to pick a turf war with a Humanities specialization; aren’t the Humanities being bullied enough by the government of the 1%, without a fellow scholar bustling in for a cheap kick to the ribs while they’re down?) At a conference I attended, around 2003, my alma mater’s own expert on postmodernism remarked that it seemed just as the idea was getting some public traction, everybody started talking about globalization instead. Most recently, the Guardian ran a column last year about how postmodernism was a premillennial flash in the pop-culture pan, and had been replaced – not by globalization this time – but by the Internet: “Postmodernism was, crucially, a pre-digital phenomenon. In retrospect, all the things that seemed so exciting to its adherents – the giddy excess of information, the flattening of old hierarchies, the blending of signs with the body – have been made real by the internet.”

Enter Exit, and Banksy’s work more broadly: playful with pastiche and parody, replete with détourned ready-mades and quoted references, at once street-wise and Sotheby’s-worthy, distinctly stylized in its stark imagery and sardonic tone, sublimely ambiguous in its uncertain attribution, its oscillation between presence and disappearance. It’s consistently preoccupied with the problematic status of art as commodity, and placed to interrogate the roles of artist and audience, and the social function of art itself, everywhere it appears. And it’s all wickedly, infinitely ironic. Banksy’s aesthetic is almost textbook postmodernism – given the logic of his work, it might not be a stretch to suggest his whole oeuvre represents a postmodern parody of postmodernism itself. 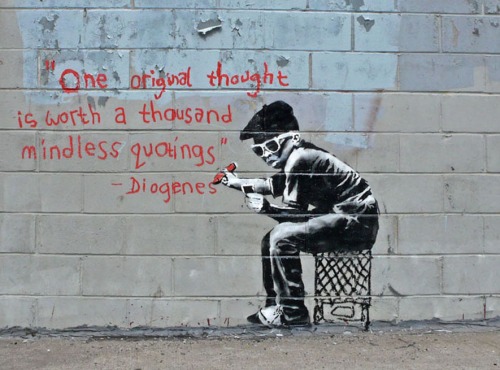 I did say “almost.” How Banksy’s work departs from textbook postmodernism is in its plain-spoken populism and its open public access. The jokes are almost never in-jokes, the ironies are immediately grasped, the images are iconic, the themes and statements are clearly political – addressing controverial issues and matters of public interest – and the language is both direct and fiercely witty. Dawkins would be hard pressed to find in Banksy’s version of postmodernism the perceived obscurity, uselessness, and social detachment at which his “blind and dumb” criticism takes such gender-coded and ambiently xenophobic umbrage. (The artist himself might object to having his work described as “postmodernist.” But it’s not the artist’s job to interpret one’s own work for the public. That’s tacky.)

And yet at the same time, Dawkins would also look simply ludicrous to denounce Banksy for postmodernism’s perceived sins of fakery and dissimulation – er, better make that more ludicrous than he already looks for missing entirely the meaning and materiality of fakery and dissimulation for the culture of late capital. (Okay, that’s enough about Sir Dick; his problem is more with postmodernist scholarship, not art.) As with quintessentially postmodern productions like Videodrome, Philip K. Dick stories, and the surgical body art of Orlan and Nina Arsenault, Banksy’s work messes specifically with perceptions and assumptions about what’s real or authentic, and what isn’t, in its use of trompe l’oeil tactics and, moreover, in the uncertainty his work leaves in its wake: “is it a Banksy?”

its neither real or a hoax. its a banksy
– this guy I know

What the film does, then, is amplify this almost-textbook postmodern aesthetic – it creates more ambiguity and play in the very gesture of posing and purporting to answer questions. It turns the documentary form on itself and so turns the screw, to collapse the form’s defining premise in truth-value and the real into a hyperreal hall of mirrors, a procession of footage, interviews, narration, and montage that leave it impossible to distinguish what is simulation and what is too weird to make up.

Exit is a documentary about a would-be documentarist documenting an eminently postmodern scene of cultural production. Compounding this recursive premise is the story it tells, which fast becomes either stranger than fiction or a fantastic farce. Or both. The most absorbing facet of the film is how it both supports and subverts the post-Romantic ideology of artistic authenticity and originality.

In the first place, the proffered genealogy of “street art” is highly selective and dehistoricized, a speciously sketched “birth of a movement” that, as public art of social revolt, ultimately differs more in degree than in kind from its venerable predecessors in wildstyle graffiti, Dada, and Don Juan.

Moreover, the basis of Banksy’s and Fairey’s work in ready-mades and various types of appropriation, of devices and spaces as well as images, renders their protests over Guetta’s perceived artistic inauthenticity at once undeservingly harsh, more paradoxically post-Romantic than postmodern, and absurdly ironic. The documentary narrative, to its credit, situates Guetta in the tradition of Duchamps, Warhol, Koons, Kostabi, and Hirst. This is also equally the tradition to which Banksy belongs (at least as much as he belongs to that of Bronx wildstyle and Basquiat), however much he and Fairey disavow it, however truly or feignedly Banksy appears discomfited by critical and commercial success in the high art world of millionaires’ trophy cases.

Ultimately, though, the film succeeds not despite but because of these ambiguities. It is a film thoroughly consistent with Banksy’s paint and sculptural work, a varition on its major themes (the critique of the art commodity, the interrogation of the author function and its inordinate cultural capital), a bracing rejuvenation of the postmodern sublime, and a persuasive realization of postmodernism’s political potential.

How it realizes this potential is perhaps best illustrated in the Disneyland sequence.

The Thunder Mountain Gitmo detainee installation is pointedly political in its imagery, placement, and public visibility; however the viewer interprets it must deal with the disconcerting juxtaposition of leisure capital and neo-imperial torture.

Accordingly, the piece demonstrates the real limits on and risks to genuine freedom of radical expression, not just in its reference points but in its placement and in the documentation that shows the stick it throws in the spokes of an average day at the “happiest place on Earth.” The film’s use of the piece footage is itself as astonishing and political as the piece itself, given Disney’s notoriously tight and litigiously guarded control over its public image (discussed in another fine documentary, The Mickey Mouse Monopoly). The very use of this footage in the film tests credibility, as a provocation to the corporation that has become emblematic of copyright extremism and hypersensitive perception management.

Exit‘s Disney footage also engages a postmodern politics of historical memory – it captures and commemorates a moment of daring guerilla art that tests believability, but for its corroboration by archival period reports in news media. If “the events of 11 September signalled the death of postmodernism,” as the Guardian has it, this piece and its documentation signal postmodernism’s return with a vengeance, expressed with reference to September 11 itself (the catalyst for those Guantanamo detainments).

The copyright and legal questions prompted by this and related scenes of subversive appropriation (like the anecdote about the counterfeit pounds) put the film’s ambiguities and ironies to perhaps their toughest test. After months of speculation and dispute over the film’s veracity (including the intriguing suggestion that the film’s main subject, the French documentarist Guetta, was played by Banksy himself), reports emerged a year ago that Guetta was being sued for copyright infringement. A legal proceeding like this still doesn’t necessarily prove anything about Guetta or the film, but it does provide some compelling evidence towards resolving the film’s ambiguities (and spoiling some of its fun, as copyright law all too regularly does). A ruse that involves sworn oaths and lawyers’ fees seems a colossal project for even an artist of considerable patience, tenacity, and resources like Banksy.

In any case, Exit is perhaps best understood paradoxically, as the cinematic equivalent of Banksy’s counterfeit Princess Di pound note: turns out you can spend it anyway. That’s the cultural logic of late capitalism at work.