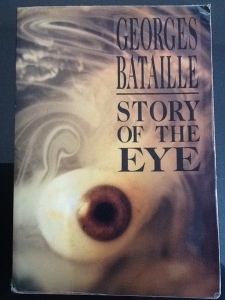 Among the new entrants to the Canadian public domain this year is the French critic and scholar Georges Bataille (1897-1962), whose inter- and postwar criticism, philosophy, and pornography – and in particular his work on transgression – enjoyed a resurgence of interest amidst the Humanities’ turn to theory in the last quarter of the 20th century. (The first MA defence I attended was for a thesis on Bataille.)

In honour of Bataille’s entry to the public domain (pas en traduction, bien sûr – seulement en français, sa langue originelle), and in response to a Daily Post prompt to share a favourite quote, I’d like to post a scene from Bataille’s autobiographical appendix to his own novella, Story of the Eye (L’histoire de l’oeil, 1928), a scene that has stayed with me through the years.

One night, we were awakened, my mother and I, by vehement words that the syphilitic [Bataille’s father] was literally howling in his room: he had suddenly gone mad. I went for the doctor, who came immediately. My father kept endlessly and eloquently imagining the most outrageous and generally the happiest events. The doctor had withdrawn to the next room with my mother and I had remained with the blind lunatic, when he shrieked in a stentorian voice: “Doctor, let me know when you’re done fucking my wife!” For me, that utterance, which in a split second annihilated the demoralizing effects of a strict upbringing, left me with something like a steady obligation, unconscious and unwilled: the necessity of finding an equivalent to that sentence in any situation I happen to be in; and this largely explains Story of the Eye. (94-95)

To me, this scene represents a moment of dramatic intensity, transgressive absurdity, and critical illumination that continues to inform and inspire my own conviction that the research imagination must be impertinent – even audacious. Story of the Eye is perhaps the most frequently lent book I own – it should go without saying that if you’ve not yet read it, you owe it to yourself to do so at the earliest opportunity.